What the Choice Between Bernie and Trump is Really About: Enough! 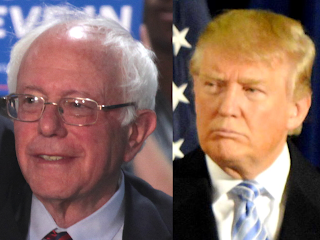 Generally, I do all I can to avoid talking politics.  It always seems to be a quagmire that divides people who otherwise would be faithful friends, allies, neighbors and family members.   However, something happened recently that was just too synchronous to ignore.  A book by Michael D’Antonio about Donald Trump has just come out, entitled, Never Enough.   In general, Never Enough highlights Mr. Trump’s insatiable appetite for wealth, power and fame.  Apparently, he doesn’t feel he has enough of any of these yet.  Throughout his campaign, he promotes as a virtue that he has self-funded his campaign, making him beholding to no one. We are supposed to interpret this as an indication that his values and actions, were he to become President, would align with the common man and woman.  And yet, as Never Enough points out, his past actions are more likely to predict a pattern of loyalty to one man – himself.

I think the core of Trump’s appeal is that most of us don’t feel we are enough.  To align with someone who oozes wealth, success and fame somehow makes us feel better about ourselves. We get the feeling that by associating ourselves with him, some of his qualities will “rub off” on us.  But I see this as a core misconception of the Never Enough culture in which we live. We’ve been taught that we aren’t enough, so we’ve learned to subsidize ourselves with things outside of ourselves.  We buy or borrow our enoughness through titles, possessions, affiliations and positions of power. When we buy or borrow enoughness, however, we deep down know that this is what we are doing.  It doesn’t really change our inner fear that we are not enough.  So these external affiliations, along with addictions and distractions of all kinds, become short-lived salve, not a cure for what truly ails us at our core.  The danger in believing that Trump will make America great again (and by extrapolation, make us great again) is that we are buying the old snake oil all over again.

Michael D’Antonio’s book spurred me to ask this:  What does one’s political viewpoint say about where his or her philosophy falls along the Never Enough to Enough spectrum?  I think all could agree that while Trump anchors the "Never Enough" end – building walls and denying entry to Muslims; I take Bernie’s self-identification as a “Democratic Socialist,” his plea for pay equity, universal healthcare and Wall Street Reform as indications that his vision for the world is one in which there is enough for everyone, enough for Earth and enough for future generations.  I think it is fair to say that the other candidates fall somewhere in the middle of this spectrum.  From these two extremes of the spectrum come very different views on “us versus them.”  While Trump is quick to criticize a political rival, stigmatize ethnic groups, and advocate for “bombing the hell” out of Isis, Bernie is openly complimentary of his opponents and speaks of building coalitions, togetherness and citizen engagement. One has the effect of polarizing people against one another, the other, seeking what unites.

I do not judge a single person for their chosen position along the Trump - Sanders spectrum.  Diversity is healthy.   But what I also know by studying the macro-trends that guide evolution including human consciousness, is that there is a clear and indisputable trend through time towards greater and greater connection across differences.  As Evolutionary Biologist Elisabet Sahtouris, PhD points out, species compete until they hit a crisis point of scarcity or environmental damage. It is those of the species who develop a strategy of cooperation and sharing equitably that go on to thrive. It seems that we are at this very crisis point as a human species.  Indicators such as climate disruption, drought, species extinction, sea level rise, economic austerity, poverty and war are clear data that a strategy shift from competition is required, and fast.  The established political, legal and economic systems do more to block humanity's ability to adapt than to support it. Many are "doubling down" by flaming fear that there is "not enough" security, economic stability or American status or power. Others are pointing out that were it not for hoarding of wealth and careless waste, there actually would be enough for everyone.   I also think many of us are questioning the efficiency and effectiveness of incremental reform - change at the level of symptoms, not root, common cause.  We are told to be more realistic, to work within the broken, competitive system. But where has that gotten us?  Further into climate impacts.  Further into wealth inequity.  This is no longer good enough.  Not for me. I feel certain that we could do much better.  What if instead we spent our time and energy building something we actually want - "build it and they will come"?
A change in course cannot happen without a leap of faith - faith in ourselves and in our inherent enoughness to achieve alignment of the outer world with our inner values.  Part of the Never Enough Story has been to intentionally disempower, trip up, bury in red tape, divide and conquer, distract, bait and switch. Any existing power structure will fight to defend itself. No wonder so many of us feel so frustrated! But what if we were to look for what and who is supporting humanity's empowerment right now?  Who is cheering on innovation, community transformation and equality of opportunity for all? Who is making a dent in the "I'm not enough to do anything about it" malaise?
We mustn’t forget that major leaps forward are a part of human history, as evidenced by the "I have a dream" movements of Gandhi and Martin Luther King, and John F. Kennedy's race to the moon.  I'd like us to start believing in big dreams again. We must remember that the Dark Ages led to a Renaissance. I feel that we are on the verge of a renaissance now.  Human spirit, human intention and human genius don’t go away.  We don’t ever lose them.  We are an inseparable part of a universal Enough Story which is 13.7 billion years old, an incredibly creative and intelligent story of self-sustaining ecosystems that predictably create enough for everyone forever.  Nature is our greatest teacher. Its intelligence is literally baked into our DNA.  We need to believe in ourselves again by recovering that Enough Story from within ourselves. From this reinforced core of universal enoughness, we find that we have the strength and the power to say, "Enough is enough" and be heard this time.
There comes a time when it is well worth it to stir the pot, to call attention to a stark and critical difference, a divergence in the road, a choice point. What is at stake for us is not merely Republican versus Democratic values. Those are both structures of the old "Never Enough" paradigm so can only go so far to fix things.   Ours is more a choice between the known entity of “Never Enough” style greed, power, influence and control, and an arising vision that believes in enough for everyone, for Earth and for future generations. How can we do this differently?  How does nature share?  How do we participate in creating the "enough" we know is possible?  Some call sharing socialism. But old labels can be used to mislead and divide. I call it Enough. And Enough is something we can all agree on because it is life itself.

We can embrace an Enough world now, or we can experience more of the painful status quo of the Never Enough Story. It's really up to us.  I choose to leap now. How about you?

To learn more about Laurie McCammon's upcoming book (April, 2016), Enough! How to Liberate Yourself and Remake the World with Just One Word, go to http://www.weareenough.com/

Trump:  By Alex Hanson from Ames, Iowa [CC BY 2.0
(http://creativecommons.org/licenses/by/2.0)], via Wikimedia Commons