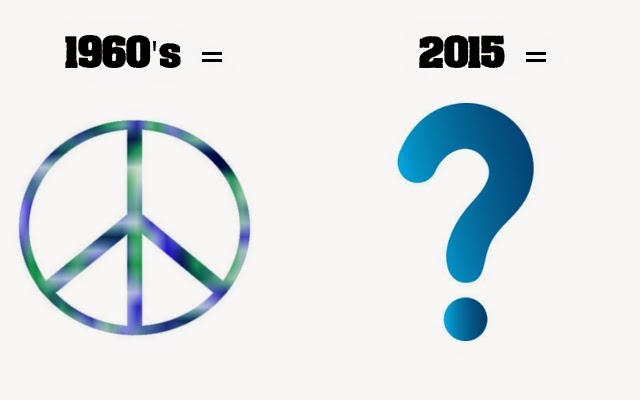 I'm sure most of the people who would read my blog have heard of Charles Eisenstein, who is very hot on the circuit these days. I have been following his posts with interest, particularly because I feel his work on "the new story" is in alignment with Enough. But I've noticed something else. He is yet another prominent person who is admitting he does not have a clear vision of the way forward.  In a 3 post series he shares the story and aftermath of a near mutiny at his retreat in Bali.   He is supposed to be the expert, people are coming to him for answers he does not have. They are angry and frustrated. They want him to take charge of the group.  Through his posts, he is trying to come to terms with not knowing how to fix it and how to find the silver lining, the breakdown-breakthrough.  I witnessed a similar near-mutiny at the New Story Summit at Findhorn in late 2014 during which "mutineers" in the middle of the night had littered the stage with post-it notes spelling out "We don't know."  I use the term mutineers lightly because I believe they were divinely inspired truth-tellers, people who were courageous enough to face their uncertainty, discomfort and pain and to name it.

Last winter, Margaret Wheatley was having what seemed like an existential crisis of her own, so went on extended retreat at Pema Chodron's convent up in my neck of the woods.  She wrote that she was losing faith in humanity as not much had changed since she first wrote Leadership and the New Science.  I predicted the fall of the expert paradigm when I wrote the  "Expert to Essence" section of my book three years ago. But it seems to be happening now with increasing public regularity.   These are tough times to be an expert, particularly in the higher consciousness community for which the expert paradigm is quickly losing relevance.

I know by all outer measures, the world seems pretty grim right now, and change seems to be happening far too slowly to meet the enormity of the challenges we face.  But I see every reason for us to feel optimistic about the future because I am looking in different places, the places that I believe birth the future and offer the kinds of solutions we cannot even imagine yet.   I see that much has changed in the subtle (causal) realm and feel the pulse of the spiritual women's movement quickening significantly just beneath the surface. I witness profound inner and outer breakthroughs every day in those who are dedicated to their spiritual growth. I see thriving social movements and green businesses finding firmer footing and more fans.  I see people moving out of jobs and relationships that no longer fit. I see people being less materialistic and more introspective. I see technology making it cheaper and easier for people with similar visions of the world to come together and to collaborate. But perhaps the greatest breakthrough is in our increasing ability to directly access what Rumi called "the field" and Rupert Sheldrake called "the morphogenetic field."  Ideas that come from this place are fully, instantaneously formed. They come from outside the box of our current Never Enough mindset, instead drawing from the well of abundant enoughness and connectivity.   One small example of this:  it is from this place that the Enough Message © came to me.

Despite acknowledging that the Enough Message was accessed from this divine field of awareness,  I still cannot assess the Enough Work without obvious bias. I have been its scribe and guinea pig for three solid years, so have a personal relationship with it that disqualifies me from possessing true objective perspective.    But I've never felt a more opportune moment for the simplicity and optimism of the Enough Message. From what I understand about the Enough Message, it is not complicated what we need to do to flip the paradigm.  All we lack at the moment is a simple common focal point for action, a shorthand if you will, a way to feel we are all in this together. The 60's had the peace sign. We need the equivalent of a peace sign for our present time.   I get a strong feeling that Enough could be that symbol because it is not a prescription but an inner, personal assessment of ourselves and the world.  Your enough is not my enough, so defining Enough invites participation, relationship and co-creativity.    At a time when even the experts are doubting themselves and some of the most popular TED speeches are about shame and vulnerability, I think we may very well have reached the breakdown-breakthrough  - the "enough is enough" - moment where "I'm not enough" is so intensely painful and so in our collective experience, that we are ready to do something radically different to shed it for good.

In his post below, Charles searches for an answer to the question, "What should we do?" I love his description of how we cannot seem to find peace with whatever we try to do, and why, no matter how hard we try, we feel that we are failing.  I would add to his vivid map of the "I am not enough and am not doing enough" landscape, that the game is rigged by the Old Never Enough Story itself.  I would suggest that  believing "I am not enough and am not doing enough" is the cause of our ineffectiveness and not merely a symptom. Our embeddedness in the Never Enough belief system is like finding ourselves in a pool of molten tar. From within it, we cannot move far or quickly. But who is to say how quickly and effectively we would be able to take action from outside of it?  For most of us, the "not enough" limiting mental model of ourselves takes root long before we even reach kindergarten and certainly long before we have the capacity to challenge its validity. And so we ingest its poison without even knowing it, limiting our potency and effectiveness as change agents despite all our efforts, insights and good intentions.

Enough as a new sign of unity could express a refusal to internalize "never enough" disempowerment, victimhood and disenchantment ever again.  Enough could be a statement of conscious divestiture from old structures and old systems that abide by an exploitative, destructive  "Never Enough" ethic. But the most powerful potential for Enough as a symbol of unity is when we use it to claim and define the beautiful vision that we do want - enough for ourselves, enough for our communities AND enough for our planet. If we claimed this more complete, whole enough as a group, and held governments, companies and institutions to OUR standard, the world would have to meet us where we are - in a place of expanded consciousness where we only choose to be in relationship with people and institutions that pay it back and pay it forward.