How I Know for Sure That Scarcity is a Myth 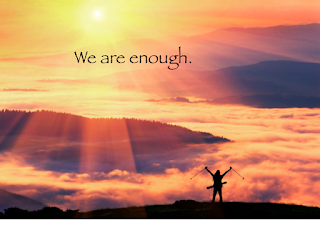 In Enough! How to Liberate Yourself and Remake the World with Just One Word, I state that I believe scarcity is a myth. How could this be when we see evidence everywhere of dwindling natural resources, species extinction and global warming?

I am not saying there are no limits or that everyone presently has enough. What I am saying is that most of the scarcity we see around us is the result of human choices that disrupt what otherwise would be naturally sustaining, self-perpetuating systems. I am also saying that hoarding, waste and greed by the few prevents what could be a more humane and peaceful distribution of the "enough" that actually already exists.

Nature is organized into ecosystems - systems which have reliably created enough for diverse species in a balanced way for billions of years. As deliberate disruptors of these systems, we as humans have rejected the wisdom of the life-giving Enough systems that would sustain us, instead presupposing that our intelligence is superior and our right is to use resources however we wish. And yet we are the only species of 8.7 million species on Earth to live in defiance of the Enough Story. How intelligent are we to ignore the intricately complex and interdependent systems that sustain life?

Riane Eisler, in her seminal work, The Chalice and the Blade, divided the human cultures which have made this planet home into two categories - the dominator model and the partnership model. The dominator model has been in place for over 5,000 years and is the predominant world culture in which we now live.   Although we hear so very little about prehistory, there is mounting evidence of a vibrant, intelligent partnership culture in the Neolithic period, with the last surviving of these on the island of Crete.

Far from being savage or ignorant societies, Eisler concludes that "pratically all the material and social technologies fundamental to civilization were developed (in these partnership societies) before the imposition of a dominator society. " These cultures were peaceful, agrarian, egalitarian, concerned with ensuring the greater good for all (including protecting the vulnerable including women, children and the elderly), and worshiped the life-giving power of mothers, including Mother Earth. In contrast, the dominator culture which would impose itself on Earth thereafter was and continues to be war-loving, hierarchical, authoritarian, male-dominant, and concerned with concentrating power and wealth for the few, and worships the life-taking power of death. Recent advances in carbon dating and further examination of ancient archaeological sites have helped us to peer ever deeper into humanity's past, helping us to realize that our present dominator culture is not the only one that has ever existed - or thrived -  on Earth. Not only did partnership cultures exist, but we already know that they existed in equilibrium and abundance for thousands of years (and perhaps for tens of thousands of years.)

Most startling to me given my lens of contrasting Enough and Never Enough paradigms,  was the revelation that the dominator tribes who eventually decimated the peace-loving agrarian cultures of the fertile valleys and rivers of Eastern Europe came from two places where food would have been scarce and conditions very difficult - the southern desserts and the northern steppes.  It makes perfect sense that being reared in such harsh conditions, citizens of these nomadic tribes would over time adopt a scarcity "Never Enough" mentality, while those who had more than enough due to agricultural technology and favorable soil and climate would not. Clearly, the standard of living enjoyed by these contrasting cultures was extremely different.  What is unfortunate; however, is that even after the dominator societies took up residence in the fertile river valleys where there would have been plenty, they did not abandon their scarcity mindset.  Instead they went deeper into greed and hoarding. They raped, killed, pillaged, enslaved and imposed their scarcity mentality on the societies they conquered.

We live in a world in which the collective genius of humanity partnered with nature could provide enough for all forever, and yet we continue to buy into narrow-minded fear-based stories. A recent Koch commercial states that we will need to double the production of crops we produce on present farmland if we are to meet the needs of a growing human population. The solution they put forth, of course, is more and better chemicals. What this approach ignores are our much broader options and our genius - to create urban rooftop gardens, community gardens, to turn useless residential lawns into productive permaculture gardens, and to make different choices regarding human reproduction, including fighting for the rights of women to control their bodies and to gain access to birth control.

The choice to believe that only a scarcity scenario is possible is out of alignment with the superior intelligence and enduring pattern built into the universe (and in our own DNA) that ensures enough for all.  But rather than wallowing in guilt, fear or shame about this, feeling we are not enough to change things, we should be optimistic about our ability to realign with this greater, wiser and more powerful story. The instructions for how to create enough for everyone is built into the entire cosmos. We are remembering how to look for it now. And this is why I am so hopeful about the future.

When we realize we are actually enough, and inseparable from the universe and its ability to create enough, we realize that a pathway to plentitude has always been available to us as we tap into our own true natures. It’s just that this innate pathway has been obscured by a seriously distorted dominator (Never Enough) worldview that has been narrowly fixated on scarcity and fear. I call this rogue worldview the Never Enough paradigm.

Our problem isn't a lack of genius or will or technology.  Our problem isn't that Earth is not abundant or big enough to meet our needs. Our problem is one at the level of consciousness itself:  that we cling to a worldview that is not only inaccurate but dangerous, for as we believe, so we create. It is a worldview ruled by fear which creates panic, greed, hoarding and violence, leading to the self-fulfilling prophecy of scarcity. It is a worldview that disregards that we are holons - both individuals and part of a larger interdependent system, a system whose rules and limits we have been choosing to ignore. For what benefit?  Being so far out of reality is not intelligent or practical or advanced. Neither does it create the kind of world we want where we each have the security, peace and abundance we desire. We are being nudged to leave the narcissistic and adolescent phase of our human development behind to step up to be adults - to participate in ensuring a better future for all and not just for our own fleeting pleasure.

We mustn't be afraid to color outside the Never Enough box. In fact, we must.  Because coloring inside the box has left out far too much of the bigger picture. It is time to awaken to the much larger Enough Story of the universe and to realize that the Enough Story is also within us.

Laurie is the author of Enough!  How to Liberate Yourself and Remake the World with Just One Word, Conari Press, out April 1, 2016.